A Russian ballet with a TWIST

Reaching historic heights has been a penchant for Kezia Hendrix Rolle, executive director of the Jacksonville Centre of the Arts (JCA), since she founded the non-profit as North Florida’s premiere training ground for pre-professional training dedicated to African-American students.

JCA is a 501(c)(3) non-profit organization and an extension of Rolle’s  first community recreation endeavor – Northside Centre of the Arts established in 1997.

Combined, the two programs are celebrating 18 years of achievement with its most aggressive production to date – “The Firebird.”

On May 31, JCA presented an original and contemporary adaptation of the 1910 Russian ballet at the Thrasher-Horn Center for the Arts, located in the neighboring town of Orange Park.

“The JCA creative team has wanted to present our own production of  “The Firebird” for many years to get out of the traditional recital and take dance to a new level” said Rolle. “We are giving the city of Jacksonville an opportunity to be exposed to more professional-level work with custom-made costumes, high definition sound, intelligent lighting and live video projection.”

Rolle selected the Thrasher-Horn for its state-of-the-art amenities and more than 800 patrons filled the lower level and balcony to enjoy the year-end culmination of work endured by their children, relatives  and friends.

Embracing a new fire
Curtis Williams mastered the daunting task of penning a contemporary ballet story that successfully cast more than 70 JCA dancers from six levels of training technique ranging from beginners to the most prestigious – dance theater.

Williams’ adaptation captured the essence of the classic ballet’s folk tale’s themes – good vs. evil – and further aligned with a traditional ballet production – movement-based art form that tells a story without words.

The city of New Orleans complete with Mardi Gras flare was the setting for Prince Julien, danced by Joshua Abott, who pursues a magical journey bereft by an evil and mysterious Monsieur Marcel embodied by Trenton Shakespeare]. The original ballet’s familiar motif of a red feather is “gifted” to the prince, then cursed by a spell. To overcome evil, he seeks the assist of an enchanting Firebird that represented goodwill and fortune.

African dance included
“Our entire beginning is non-“Firebird’’ and it was challenging to include all of the dancers, so I created new roles and added parts like the garden scene,” stated Williams, who led a team of artistic directors consisting of Julie Williams, Emily Chapo, Dewitt Cooper and Val Salkinov.

“The essence of the story boils down to rather than trying to take ‘Firebird’ and re-writing. It was about re-routing it so that it’s taken out of Russia, placed in New Orleans, and then we determined how the story works,” explained Williams, whose dance expertise includes posts at Florida Ballet, Virginia Ballet Theatre and Balanchine in New York.

Transfer all of the aforementioned to the dance styles of ballet, modern, jazz, tap and the results produced a one hour and 19-minute production complete with West African dance and live congas that tied-in Haitian rituals and a Zydeco club scene opener complete with a “King of Swing.”

Creative set
The street sounds of blue jean clad tap dancers transitioned the scene from a manor house to a garden blooming with baby bird dancers adorned to resemble flowers.

With their varied textures of hair upswept in buns, budding ballerinas were costumed to mimic trees with 32 leaves individually hand-stitched on their sleeves by seamstresses charged with creative design fulfillment set forth by both Rolle and Williams.

B-CU-bound dancer
Octavia Glymph began dancing with JCA at the age of 8 and was cast as “The Firebird.”  The Douglas Anderson High School senior danced “en pointe” for her first lead role ever and what may be her final stage performance. 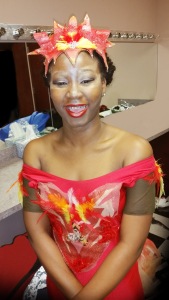 This fall, she will shed her orthodontic braces, enroll at Bethune-Cookman University and leave ballet behind to major in criminal justice. Her career aspiration is to become an attorney.

“I love to dance; it’s just not something I want to pursue in life,” stated Glymph, who was handpicked by the JCA staff for the coveted role.

“Octavia was cast as the lead because she’s always had very clean technique and we wanted to do something special for her because she’s always been the underdog,” stated Rolle. “We wanted her to feel special and have ‘her time’ before she graduated by being “The Firebird.”

Glymph glided “pas de duex” with Abbot, whose seamless style and technique is also a manifestation of training with JCA since the age of 8.

Abbot is currently a senior dance major at Jacksonville University whose dream is to perform with The Dutch National Ballet. Addie Higgins was cast as the third lead and princess in a multicultural cast symbolic of Rolle’s commitment to artistic diversity.

Proud parents
Throughout the 2014-15 season, JCA parents spent a large part of their children’s lives as artistic servants. They double-dutied as suburban taxi drivers, fetched quick meals between rehearsals or after classes, and watched funds dissipate from their bank accounts from tuition payments.

Tracy Bouldin extended the aforementioned with an additional role – president of “Parents for Fine Arts” at JCA, which is also a board of directors position.

For the past two years, Bouldin has led a legion of parents in organizing the production, acquiring sponsors, launching off-season fundraisers, and supporting Rolle in relocating the organization to the historic Stanton building in Jacksonville’s LaVilla District.

Bouldin, whose daughter Destiny has been training with JCA for seven years, is a staunch JCA advocate and community spokeswoman.

“I have kept Destiny at JCA because I believe in the product. I have seen Kezia’s work in the community and around the world, “ said Bouldin who is excited about presenting “The Firebird.”

“It speaks well of the technique taught during class itself as opposed to the bells and whistles of a recital’s shimmer, glitz, and glamour,” offered Bouldin. “It allows the versatility of each dancer to be presented through many dance forms taught throughout the year.”

Trailblazing leader
The parent exhibiting the most pride was executive director Rolle whose 16-year-old daughter Kaila Justice has been training under her mother’s tutelage for 10 years. Justice had to forgo “The Firebird” experience to prepare for her role in Theatre Jacksonville’s production of “Hairspray.”

If family legacy is any indication, she will be a trailblazing star like her mother,  who was cast as the first African-American “Barbie” at Walt Disney World Resorts where she started her performance career after earning a Bachelor of Fine Arts degree in dance at Jacksonville University.

She is a former member of the Orlando Magic dance team and has been employed by Busch Gardens as a dance captain as well. An accomplished model, Rolle was named one of Jacksonville’s “Ten Most Beautiful Women” in 2014 and has devoted the last 20 years of her life building a program that boasts alumni on tours with “Cirque Du Soleil” and Ailey II/Alvin Ailey American Dance Theatre.

“Ending this season with ‘The Firebird’ marks the beginning of JCA moving forward and continuing to rise as an artistic leader that sets the standard,” said Rolle. “We are grateful for the opportunity and look forward to an even wider audience in 2016.”