Posted by Penny Dickerson on November 26, 2019 in Florida Courier, Journalism 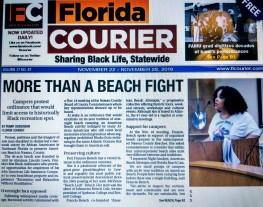 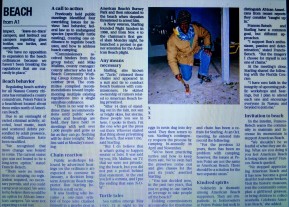 Activist Ron Starling chained himself to a gazebo at Burney Park in protest of an ordinance that could ban beach camping at American Beach.

The layout above is a pre-publication PDF prior to final cutlines. Please follow the Florida Courier for digital updates at https://flcourier.com.

More Than A Beach Fight

Protest, petitions and the imagery of one man shackled in chains led a two-week outcry by African Americans in Northeast Florida to preserve American Beach in Nassau, County.

The 40-acre beach was founded in 1935 by A.L. Lewis, Florida’s first Black millionaire who provided opportunities for employees of his Afro-American Life Insurance Company to own beachfront property and experience “Recreation and Relaxation Without Humiliation.” 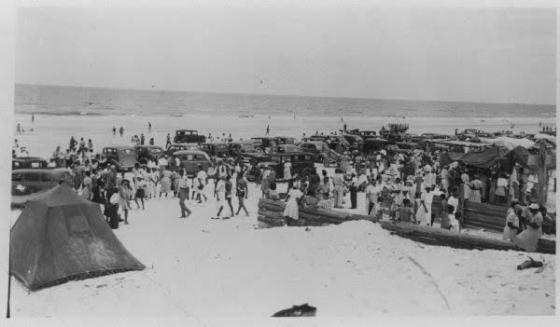 An archived photo image of American Beach in the late 1930’s highlights the origins of beach camping pre-segregation.

Following widespread media coverage, the recent activity culminated with a Nov. 18 meeting of the Nassau County Board of County Commissioners where key representatives showed up to be heard.

At stake is an ordinance that would eradicate an 85-year tradition of overnight beach camping, an American Beach activity indulged by many African Americans who still covet local memories of social grandeur when segregation prohibited Blacks from swimming in the same Atlantic Ocean that brought them to American soil. 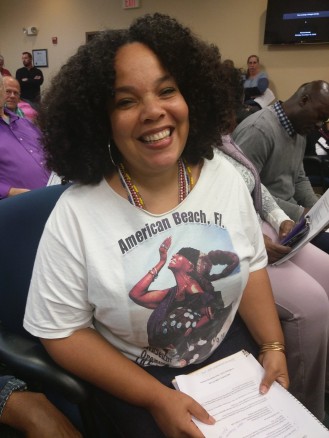 Peri Frances-Betsch has a vested interest in the ordinance outcome.

She is a passionate advocate of the great-great granddaughter to Lewis, and arguably the most public, cultural preservationist descendant since the 2005 passing of her aunt, MaVynee “Beach Lady” Betsch who is sister to Johnnetta Cole, former president of Spelman College and Bennett College.

Frances-Betsch co-founded “American Beach Afrotopia,” a progressive collective offering historic tours, weekend retreats, workshops and cultural events. Although she is based in Atlanta, the 47-year-old   is a regular at commission meetings.

At the Nov. 18 meeting, Frances-Betsch spoke in support of organized beach campers in the unincorporated Nassau County Beaches. She asked commissioners to consider that within four unincorporated beach sites exist very different histories and traditions.

We are small groups of campers with an 85-year tradition on American Beach. People have been camping here before there was a single building, said Frances-Betsch.

“We strive to respect the environment and community and are worthy stewards. We are sustainable, low impact, ‘leave-no-trace’ campers, and instruct our campers regarding glass bottles, sea turtles, and campfires.

“We have no opposition to expansion to the beach ordinances because we haven’t been breaking the regulations that are currently in place.”

“We recognized that more change was bound to come. The current status quo was not likely to be a long-term option.” stated Frances-Betsch. “There were no restrictions on camping, no registration required, no necessary permits, and you could camp year-around. We were led to believe there would be an option for African-American campers. We were not expecting a total ban.”

A call to action 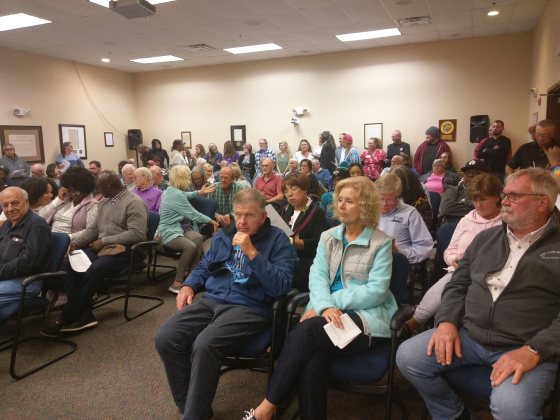 “There is no way to address these recommendations until public workshops and hearings are held…they have held 16 meetings with well over 1,600 people and gone as far as they can go. Nothing will be done tonight,’’ Mullins said at Monday’s meeting.

Public workshops followed by advertised hearings on the ordinance are expected to convene in January, a decision long-term American Beach supporter Ron Starling believes is a stall tactic.

It was Starling who became a one-man symbol of hope and chained himself to a gazebo post at American Beach’s Burney Park and then relocated to the beach when deputies threatened to arrest him. 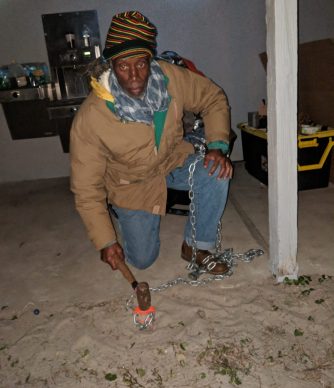 Ron Starling created a media blitz that amplified his chaining himself to a Burney Park gazebo in protest. (Photo credit: NCFL Fernandina)

A Navy veteran, Starling founded Night Sanders in 1998, and from Nov. 4 to the chairman’s first gavel slam Monday night, he launched a protest to garner attention for the American Beach plight.

Starling, also known as “Zurie,” released those chains and appeared in a suit and tie to conduct beach business with commissioners. He skirted ownership of rumors related to American Beach being privatized. 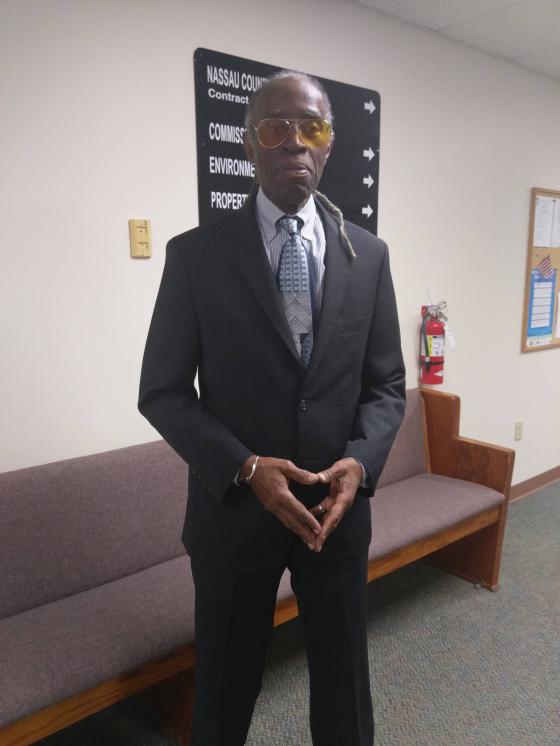 “After 14 days of standing out in the rain, not sun or bright skies, but storms, these people you see in here, I spoke to them. I’m the one who got the press out there. Whoever started that thing about privatizing the beach, that wasn’t me,” said Starling.

“But I do believe that is what’s going to happen sooner or later. It was said by you, Mr. Mullins, on TV, that we were not privatizing the beach, but you did not put a period behind that statement. At the end you left a comma, and I put the ending that says N-O-W.”

Sea turtles emerge May 1-Oct. 31 at night to lay eggs in nests dug into dry sand. They then return to sea. Starling’s contingency respects the process by camping bi-annually in April and November. 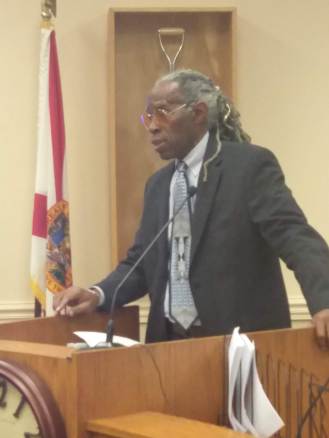 “We’ve been practicing turtles and how to keep them safe. We’ve even had the preserves come out and give classes for the past six years,” asserted Starling.

“You just decided now, in the past two years, that you’re going to use turtles as leverage to take people off the beach?”

Holding commissioners accountable for timeframe and change has been a refrain for Starling. At an Oct. meeting, he entered the following into record:

“For the previous 22 years, there have been no problems with camping; however, the issues at Peters Point are not the same as American Beach. There should be a solution for the two separate areas.”

Solidarity is thematic among American Beach supporters. They are empathetic to homeowners at Peters Pointe but seek to distinguish African Americans from recent reports they consider “caught up in.”

Frances-Betsch and Starling have a common goal, but different approaches.

“I support Ron’s enthusiasm, passion and determination,” stated Frances-Betsch.  “But the imagery I choose for myself is not one of chains.’’

At the meeting’s close, Starling shared the following with the Florida Courier:

“I have zero faith in the integrity of upcoming public workshops and hearings, but I plan to attend each one and encourage everyone in Nassau and beyond to join me.”

In the interim, Frances-Betsch wants the community to maintain and increase its momentum to support American Beach.

“We shouldn’t be so fearful of what they are doing. What are you doing if you feel American Beach is being taken away? Frances-Betsch queried.

“We stopped appreciating American Beach, and it has now become a good deal for real estate brokers. Visit the historic museum, rent the community center, plan a girlfriend get-away, or bring children to collect seashells. Celebrate American Beach,’’ she added.

For more information on supporting and/or visiting America Beach, please follow these links!

← Interview with Sonia Sanchez: Truth to Power
Can Real Estate Survive in the Bahamas? →