Andrew Gillum is a winner. He proved his leadership savvy prior to launching a remarkable campaign to become the state of Florida’s next governor and the first democrat in two decades. In a razor-thin race towards victory, Gillum fell less than 80,000 votes short and ultimately conceded defeat by his opponent. But his winning spirit, his tenacity and grassroots approach, altered the political landscape of the southern peninsula and ignited an inspirational movement to both “Bring it Home” and turn Florida blue.

Gillum was a winner when he garnered votes to win mayor of Tallahassee in the state’s capital and before that, an eager pioneer who became the youngest person in history elected to the Tallahassee City Commission. Public service is a life Gillum knows well. It’s an existence he’s remained dedicated to for 15-years and one that ultimately designated him the architect of his destined, gubernatorial triumph.

But the building of an enormous campaign beast wasn’t tackled by Gillum alone. A tour de force of political consultants, enthusiastic volunteers, and the deployment of homegrown prayer all contributed to his historical bid. Billionaire Tom Steyer donated millions and an endorsement from President Barack Obama led many more. A formidable debater , Gillum galvanized voters in nearly every Florida county with both sleeves rolled demonstrating he was in it for the fight and a candidate ready to win, ready to serve, and ready to be a statesmen who would make good on campaign promises including:

One month prior to the November 6 election, Gillum addressed a captive audience at the Palm Beach County Dems 2018 16th Annual Truman Kennedy Johnson Gala Dinner. With confidence and poise, he balanced candid politics with southern vernacular ease:“If we turn to each other, not against each other, we can offer a better life for every person who calls this state home. That’s what I believe in y’all, that’s what I believe in,” stated Gillum.

“And I believe it not because I’ve been told it, but because I lived it. You’ve heard me along this campaign trail talk about the fact that as a part of my campaign theme song: I walk it like I talk it. Alright? And it’s important that we have people who walk it like we talk it.”

According to Gillum, across the state of Florida, an economy looms that delivers for the wealthy but leaves too many working people behind. A legion of Floridians can’t access healthcare, not only because of rising premiums but because healthcare is out of reach:

“Governor, Rick Scott ─ who now has the audacity to run for the U.S. Senate against our outstanding United States senator, Bill Nelson—has blocked Medicaid expansion to serve petty politics instead of serving the public,” Gillum lamented.

Gillum vowed to fight against special interests that stand in the way of taking real action on climate change. He challenged the NRA two times and rose twice the victor. He further plans to ensure Florida is a welcoming and safe place for everyone, no matter where they come from, who they love, or how they identify.

The overwhelming drive to initiate an inclusive and equitable environment across Florida may stem from Gillum’s own unpretentious roots. His endearing background became a biographical refrain that was common knowledge on the campaign trail:

“I’m not coming to you today from a penthouse apartment. I didn’t ride down a golden escalator, and I certainly wasn’t born with a silver spoon in my mouth,” Gillum shared with the same audience of Palm County democrats.

“I was born in Miami-Dade, grew up in an area called Richmond Heights — an area five hundred miles from Tallahassee and the state’s Governor’s Mansion. My mother, Frances, was a school bus driver and my daddy, Charles, a construction worker. They would get up early in the morning, loaded me and my siblings into the car, and drove us to my late grandmother’s house who anointed our heads with oil before we left for school.”

Gillum further shared that his parents’ influence and grandmother’s words drove him to be the first in his family to graduate from college — Florida A&M University, a stellar HBCU that catapulted his civic duty involvement.

But the charismatic politician with the trusting smile doesn’t believe he is an anomaly who simply emerged from the ranks like a well-calculated chess move:

“I know that there is no other country in the world where my story would be possible. But I also know that my story is not unique,” stated Gillum.

“There are millions of Floridians around this state – from 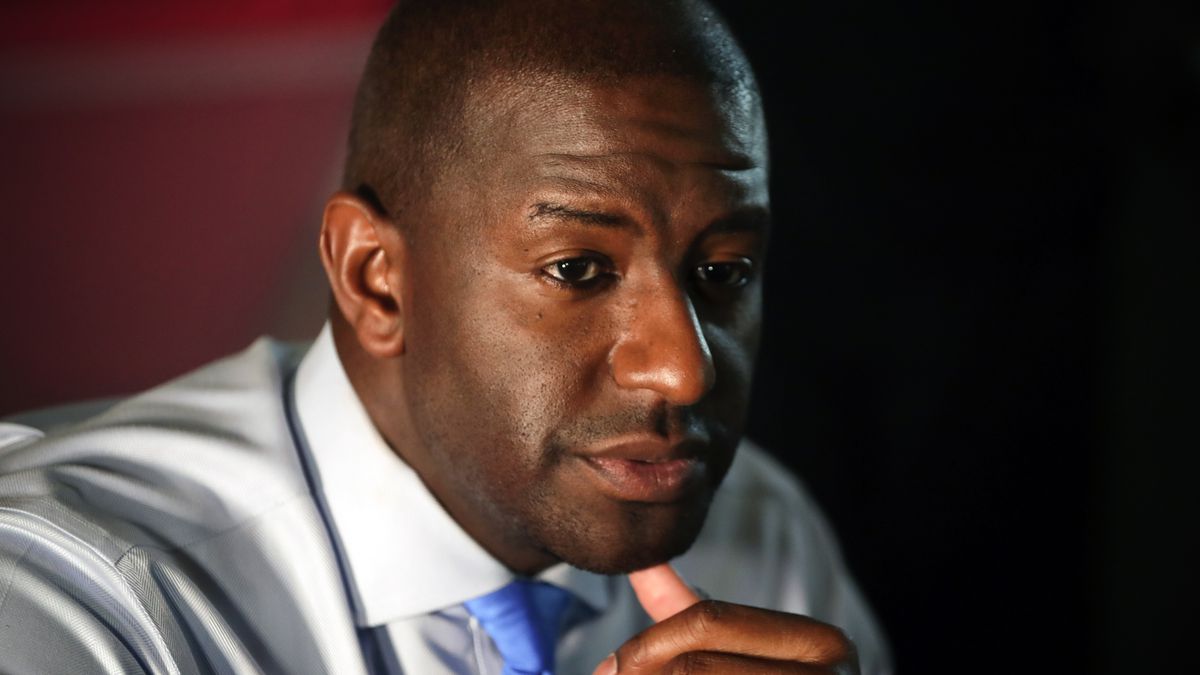 Orlando to Arcadia – who are trying to make ends meet, just like my mother did. There are millions of Floridians – from Pensacola to St. Pete– getting up every day and hustling for opportunities, just as my daddy did.”

For Gillum, home is where the heart is. He shares a Tallahassee residence with his wife R. Jai and their three kids. Notwithstanding his own comfort as mayor, he remains abundantly aware that not all grandkids, like him, will have an opportunity to get into good schools and out of bad economic situations. Additionally, there are millions of Floridians and “kids with big dreams in the shadow of big challenges.”

Over and again, Gillum stated:

“The underlying theme of my campaign is—that we bring it home.” On November 6, Gillum delivered a dignified concession speech:

“Eventhough I won’t have the blessing of serving as the next governor of the state of Florida, I still plan to be on the front lines with every one of you when it comes to standing up for what we believe in,” stated Gillum.

Voters turned out in record numbers to support Gillum’s gubernatorial run and made it clear: Florida believes in him, and he will always be our winner.