Posted by Penny Dickerson on October 29, 2021 in Blog, Creative Writing 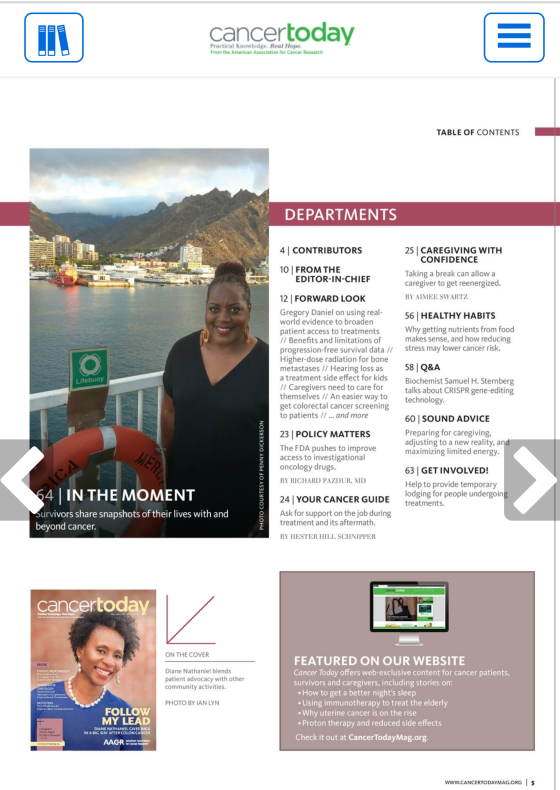 (cancertodaymagazine.com) for featuring me in a triumphant section that illuminates both the survival and current pursuits of cancer survivors. You can view “In the Moment” on page 64.

For those outside of the editorial realm, magazines work three months in advance, so when I was sent the questions below with a request for photography, it was July 2019, and I was onboard the “Africa Mercy” in Tenerife, Spain. A crew member captured the breathtaking photos that were used for publication.

Life has since changed.

The language of leave is: Medical LOA (Leave of Absence).

The contrasting photos below show me on my last day in Spain, one week before leaving Africa where I shed 35 pounds and now in Texas where I am in the midst of being treated for some (but not all) of what kept me miserable while onboard the ship.

When the October issue of the magazine debuted, I was conflicted as to how to approach an update, and further, how to appropriately show gratitude. Today it hit me: the truth is always appropriate. The details are rarely appropriate.

I also made a conscious decision to include the actual responses sent to Cancer Today Magazine that were also shared with key Mercy Ships managment prior to publication: Jitze Kramer, VP of global branding; Mark Druesne, director of communications; and Meg Newell, global brand strategist. They loved the responses, and even in hindsight, I do too.

These responses now serve as a relevant reminder to me, and for me, that my heart for service was in the perfect place.

Please take a minute from your schedule to read the October issue of cancertodaymagazine.com The digital copy makes it easy for you to peruse and also subscribe! 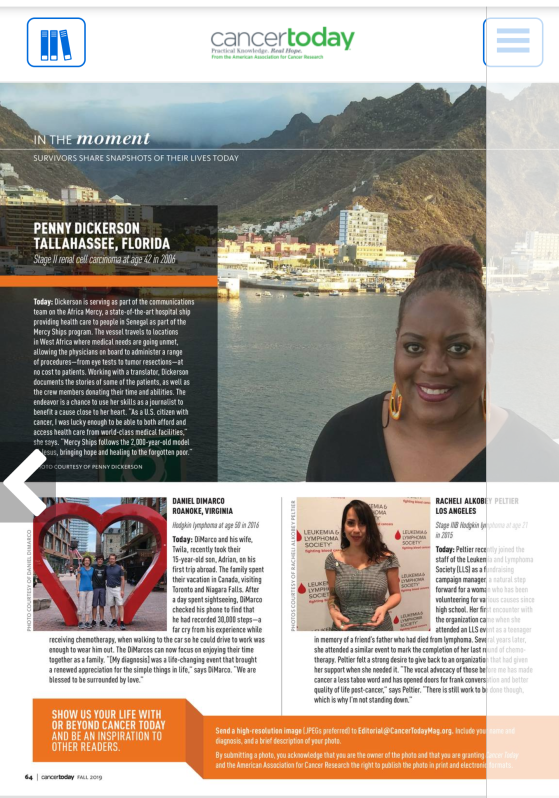 Penny Dickerson is currently a Tallahassee, Florida-based freelance journalist whose imminent address has morphed global: she departed Tallahassee in June; In July, On Boarding for Mercy Ships Africa Mercy in Texas was completed followed by a one-week  Washington, D.C. Holiday; she then flies to Las Palmas and Santa Cruz, Spain (Canary Islands) where she will meet the vessel and sail to Dakar, Senegal in August to begin a one-year field service. In jest, she tells friends, “My address is the wind!”

Cancer entered my life in a trifecta of medical mishaps. In April 2006, abdominal  discomfort prompted a surgeon to remove my gall bladder. The pain persisted. In June of the same year, an incidental finding on a CT scan during an emergency room visit revealed a tumor later confirmed as stage II (clear cell) renal cell carcinoma or kidney cancer. In August ─ on my 43rd birthday ─ I endured a partial left nephrectomy as the advised curative solution. Multiple complications and surgeries followed.

My volunteer position for Mercy Ships Africa Mercy is defined as a “writer” for the communications team. In this capacity, I will take a journalistic approach in building relationships (working closely with a translator) to document a patient’s Mercy Ships journey and create narratives that amplify patient and crew life/work aboard the Ship for external and internal marketing priorities. Additionally, I will work in tandem with Mercy Ships national offices and the global brand director and global content strategist.

The nephrectomy surgery to eradicate cancer altered my career. Three ribs were resected causing nerve damage that led to limited, left-limb range of  motion. A left-handed dual enrollment English teacher, returning to the classroom wasn’t a viable option, so in 2009, I launched a freelance journalism career that flourished.  I was a commercial success, but spiritually unfulfilled and longed to benefit the world in a more meaningful way. Mercy Ships undeniably aligned with the latter.

Eagerness eluded me during my storied relationship with cancer. I was often medically dumbfounded and subsequent surgeries bred new dilemmas. The mental toll was tremendous, my body’s strength betrayed me, and I lived in anticipation of nothing-next. It took years to recalibrate, but a triumphant spirit emerged. I began to accept assignments that offered extreme happiness like Walt Disney World Resorts and arts/cultural events. Mercy Ships is a proud transition in a long line of life-altering gigs!

The Mercy Ships mission and vision statement envelops its own medical mandate as a global, charitable organization operating the Africa Mercy, a state-of-the-art hospital ship that provides free medical and surgical services in West Africa. For those with terminal illnesses, the Palliative Care Program offers information and understanding about how to cope with inoperable conditions.

As a U.S. citizen with cancer, I was able to both afford and access healthcare from world-class medical facilities including Wake Forest Baptist, Duke, Mayo Clinic and Shands. Some would call me lucky; I claim blessed. Mercy Ships follows the 2,000-year-old model of Jesus, bringing hope and healing to the forgotten poor. I wanted to do the poignant-same by illuminating the human condition as a writer. Cancer was a formidable precursor ─ Mercy Ships is my new platform.