BY PENNY DICKERSON SPECIAL TO THE FLORIDA COURIER

The historical contributions to language by Lorenzo Dow Turner debuted on Sept. 12 at the Ritz Theatre and Museum in Jacksonville in a traveling art exhibit that invites public view through Dec. 31.

“Ring Shouters, 1930’’ is part of the “Word, Shout, Song: Lorenzo Dow Turner “Connecting Communities through Language’’ exhibit on display at the Ritz Theatre and Museum in Jacksonville.

The collection includes an inimitable compilation of artifacts, photographs, and text covering three interconnected cultures across three continents: the Gullah/Geechee communities of South Carolina and Georgia; the Afro-Brazilian community of Bahia Brazil; and the West African cultures from which the aforementioned two derived.

Journey for truth A Florida presence is relevant to the exhibit as the congressionally sanctioned Gullah Geechee Cultural Heritage Corridor (GGCHC) now extends from North Carolina’s eastern coast and in 2012 broadened its southern-half to include Jacksonville and St. Augustine.

A vibrant collection covering the Gullah/Geechee communities of South Carolina and Georgia; the Afro-Brazilian community of Bahia Brazil; and the West African are on display at the museum.

“This exhibit is about the journey of one man to know the truth, to seek truth and share truth with the world,” said Michael Allen, Community Partnership Specialist with the National Park Service who organized the Corridor’s first public meeting at the Ritz Theatre and Museum in 2000.

The museum is working with the staff at the U.S. Embassy Brasilia to develop a Portuguese language version of the exhibition for travel to cities in Brazil beginning in June 2014.

“The fact that this exhibit is in Jacksonville is an excellent family holiday gift that will inspire everyone to learn about their Gullah Geechee Heritage.”  The local community is invited to attend the next GGCHC public business meeting to be held Feb. 21, 2014 in Fernandina Beach.

Language pioneer It is apt and appropriate that a cultural statement offering homage to Turner – the first African-American linguist – is nationally established.  The vanguard scholar dedicated his life to “crack a linguistic code” and asserts that “despite slavery, African heritage, had retained and passed on their cultural identity through words, music, and story wherever they landed in the Americas.”

While slave descendents from the Carolina coasts and Georgia were and remain embarrassed and ashamed by the misunderstood dialect(s) and “Geechie speak” of their ancestors, Turner’s research and legacy substantiates its crucial preservation as a fundamental part of African-American history and the scholarly study of language as defined by his numerous published works and travel to both Africa and Brazil.

Originally housed at the Anacostia Community Museum of the Smithsonian Institution in Washington, D.C., from August 2010 through July 2011, the exhibit was “made possible by the James E. and Emily E. Clyburn Endowment for Archives & History at South Carolina State University.”

Putting on the Ritz Lydia Stewart, curator of the Ritz Theatre and Museum eagerly accepted the challenge to bring “Word, Shout, Song” to Jacksonville as the exclusive Florida venue.  “I think Jacksonville has a rich and appreciative museum culture and more than 2,000 patrons have indulged the embodiment of heritage since its September opening,” said Stewart. 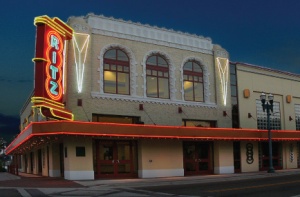 An estimated $25,000 contribution by SMG Management (City of Jacksonville) secured the exhibit and with the assistance of a Smithsonian registrar, Stewart’s “magical crew,” mounted the 2-300 square-foot collection in three days – their most expedient timeframe to date.

“We are delighted that Florida residents will have the opportunity to explore this part of their history,” said Sharon Reinckens, Deputy Director of the Smithsonian’s Anacostia Community Museum who further confirmed that Turner’s research contradicted that language of Gullah Geechee communities was “baby talk” or “bad English.”

“The Gullah spoke a Creole language and still possessed parts of the language and culture of their captive ancestors,” Reinckens added.

The exhibit’s journey begins in 1906-1917 with Howard and Harvard University where Turner earned his bachelor’s and master’s degrees respectively.

His illustrious, 53-year career as a professor is explored including posts at Howard and Fisk Universities and “in 1946 he became the first African-American professor to be hired by an all-White university: Roosevelt College in Chicago where he additionally earned a Ph.D. from Chicago University.

Among his most famous students is folklorist, anthropologist, and novelist Zora Neale Hurston whose life’s work continues to be annually celebrated with a namesake festival in her historic hometown of Eatonville.

Turner’s research is delicately chronicled including his Gullah language fascination and the famed “one hundred-pound recording machine” he utilized to interview and preserve factual presentations of widely deemed unintelligible utterances.

A touch of glass Brilliant and colorful quilts, illustrated folk tales and remarkable artwork complement the exhibit’s framed black and white photographs of slaves demonstrating “Ring Shout” along with the audio story of a Sierra Leone song  that survived a 300 ancestral passage titled “The Song that Made the Roundtrip.’’ 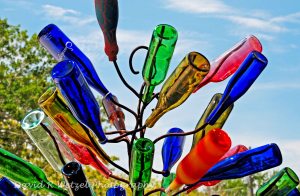 Stewart has served as the museum’s cultural and community conduit since its1999 construction on the original site of the Ritz Theatre movie house in Jacksonville’s historic African-American community of LaVilla known as the “Harlem of the South” for a 40-year span beginning in 1920.

Now a 13-year, veteran curator, Stewart demonstrates an affinity for the symbolic “Bottle Trees” and conceptualized a colorful structure of iridescent glass vessels as a Jacksonville exhibit addition.

“The bottle trees represent so much whimsy and history that I wanted to portray that,” offered Stewart.  “Their legendary mystique and belief to ward off evil spirits is an integral cultural inclusion and educational offering.”

An array of public programming and events has further enhanced community connections including a Sweet grass Basket Demonstration and Workshop presented by Charleston artisan Henrietta Snype. A Gullah Food Festival and Book signing is scheduled for Saturday, Dec. 14.

Museum admission is $8.00 for adults and $5.00 for students and senior citizens. For additional information visit http://ritzjacksonville.com