"An Online Voyage of Voice."
9 Comments

Posted by Penny Dickerson on March 26, 2019 in About, Journalism

Penny Dickerson is an independent journalist with a passion for cool people, extraordinary places, and good sushi.

Passionate about words and writing, Penny has augmented her freelance writing life by working as an adjunct English professor at Florida State College at Jacksonville where she taught English composition and humanities courses.

In 2019, she endured a humanitarian mission in Dakar, Senegal as a writer onboard the Africa Mercy for Mercy Ships, a nonprofit organization that follows the 2,000 year-old model of Jesus bringing hope and healing to impoverished people in West African countries.

As a fundraiser, Penny served as Assistant Area Director of Development for the United Negro College Fund’s $1 million Orlando team and is former Marketing Director for urban shopping center Gateway Towne Center – the gig she insists taught her everything she knows about resilience.

Born Merdis Lavonda Robinson in El Paso, Texas, she was given the nickname Penny by her mother, but friends close to the helm refer to her simply as “P.”  Raised a “military brat,” Penny traveled extensively and attended various primary/middle schools, but ultimately graduated from the controversial named “Nathan Bedford Forrest High School “in Jacksonville, Florida which has since been renamed, “Westside High School.”

Pageantry afforded her the opportunity to pursue higher education, as she won several teen pageants and was further crowned the first black Miss Florida Junior College (Miss America Preliminary) and held the title Miss Black Florida but wants to make it abundantly clear that she is not a pageant-girl snob. She does, however, love the world of “beauty.”

Prior to winning the National Shrine Pageant, she  traveled to Puerto Rico, Antigua, Barbados, Grenada, Honduras, Panama, and Guantanamo Bay, Cuba with the 1st Miss Florida USO Troupe and has traveled to virtually every U.S. city and points of the globe as a former TWA Flight Attendant who was known to fly the Vegas red-eye with friends on her days off just to get free shrimp cocktails. 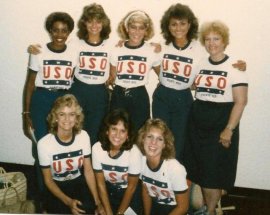 Penny is listed as an Outstanding Woman in America, Who’s Who in American Junior Colleges,         a member of Alpha Kappa Alpha Soror

ity, Inc. and is a Leadership Jacksonville alumni.

She is an American Symphony Orchestra League

Penny is a strong woman of faith who is spiritually balanced, yet unapologetic regarding her inherent belief that God could eradicate bad hair days and traffic [if he really wanted to].

She is a two-time cancer survivor of stage II renal cell carcinoma whose nickname is “Pennyfly” in the tradition of fighting cancer like Muhammad Ali, “Float like a Pennyfly, sting like a she.”

Penny is divorced, currently single, and mother extraordinaire to Kelsey Nicole Dickerson (27) who gave birth to Journey Nicole on February 18, 2012.

Like a champion, Kelsey earned her bachelor of fine arts degree in Dance from Jacksonville University four months later (May 2012).  She is an amazing dancer who deferred her masters of fine arts degree in Dance acceptance at Hollins University and is currently a full-time dance instructor for Frank Nims Middle School (Tallahassee) where she is “Teacher of the Year” 2019-20.  Kelsey is married to Donte`Boyer and they are a beautifully blended family and together have birthed one son named Isaiah Donte`.