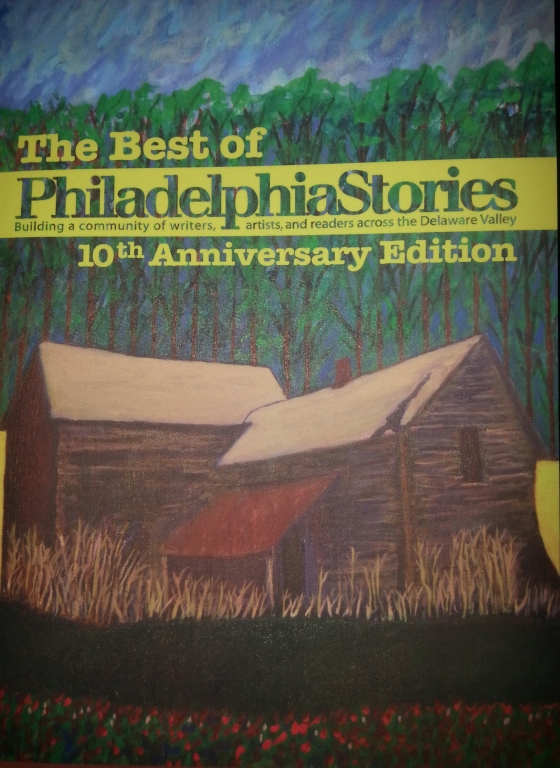 The skinny little cool poem below was selected to appear in the 10th Anniversary Anthology. It was published in the FIRST 2004 literary issue.

Am I humbled? Yes.

Am I hyped? Of course.

Why does it matter?

Well, because they had a plethora of poems to select from; they chose to include mine. In a decade, my writing voice has exponentially changed, but a coming of age poem stands the test of time. Not for nothing, they “googled my name” and found me to request a signature of release.

The other reason is that a small faction of  nameless folks had me believing I didn’t belong in the world of poetics.

My thesis mentor and director of the Lesley University Creative Writing Program, Steven Cramer, actually helped me revise this poem from a much longer, stanzaic version titled, “Era of Eccentric Cool.” I distinctly remember him saying:

Boy have I learned that lesson.

It’s an honor to be both remembered by Philadelphia Stories and to have an EARLY literary work anthologized.

Thank you immensely Philadelphia Stories! (I miss you guys, and the Kelley Writer’s House too!) 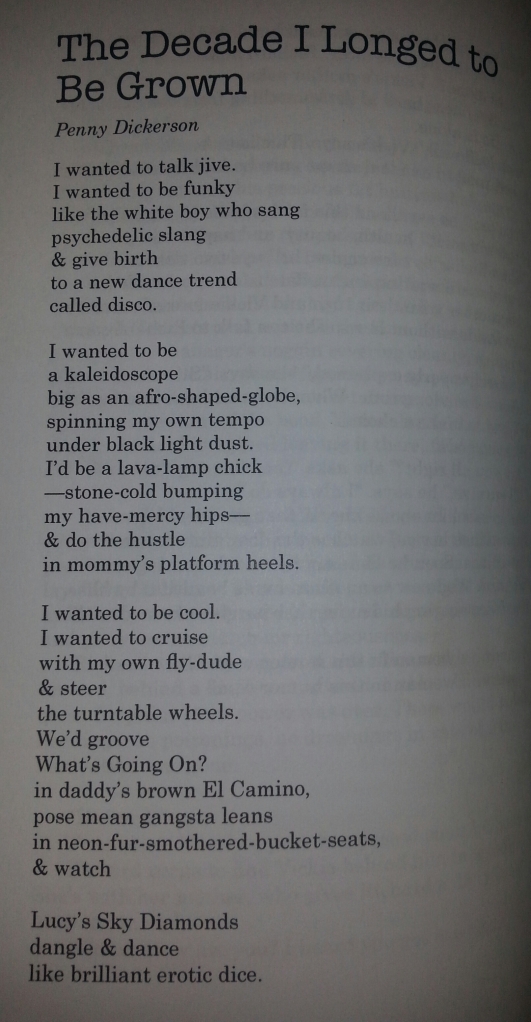 Penny Dickerson is a 1988 graduate of Temple University where she earned a B.A. degree in Journalism and is currently a M.F.A. candidate in the Lesley University Creative Writing Program (Low Residency) in Cambridge, Mass. (Graduation: January 2005). She has additionally taken a continuing education poetry writing course at University of the Arts under the tutelage of Donna Wolf-Palacio and was once a “Suppose an Eye” participant at the Kelly Writer’s House and looks forward
to her parenting scheduling and graduate school time to allowing her to come back.
Previous poetry works and journalism have been published in the anthology, Azure and Amber, the Florida Times-Union and her poem, “A Conscious Statement” won first place winner in the Ritz Theatre’s poetry contest in Jacksonville, Florida.
Penny will serve as Poet-in-Residence at Andrew Jackson Elementary School (K-8), this fall as a final graduation interdisciplinary project

PHILADELPHIA, July 28, 2014—Philadelphia Stories celebrates its 10th anniversary with a gala event at the Cheltenham Center for the Arts (439 Ashbourne Road, Cheltenham, PA) on Saturday, September 20, 2014, from 7-10pm. The festivities will include a live auction, art opening, and the release of The Best of Philadelphia Stories, 10th Anniversary Edition anthology.

Philadelphia Stories, co-founded by Carla Spataro and Christine Weiser in 2004, began with the mission to publish the finest literary fiction, poetry, essays, and art from the Delaware Valley, and to make the quarterly magazine available for free. Since its inception, the non-profit organization has expanded its programs to include two national contests, a magazine for young writers, and a books division—in addition to publishing 5,000 copies of the free literary magazine each quarter.

“When Carla and I decided to launch the magazine ten years ago, we started by telling our small group of writer friends about the idea,” says Executive Director Christine Weiser. “By the time we released the first issue at Brasserie Perrier six months later, there were more than 250 people at our launch party, most of whom we didn’t know. It’s been very rewarding to see this community continue to grow and thrive.”

“Philadelphia Stories has been instrumental not only in helping me grow as a writer but also to feel part of the Philadelphia writers’ community,” says poet Joseph Cilluffo, whose poem “A Fire During Fall Waits to Be Lit” appeared in the Summer 2013 issue. “The many events they sponsor or take part in have enabled me to connect with a network of writers, editors, poetry readings, and craft workshops.”

The 10th Anniversary Celebration will also be the opening of the art exhibit, Extraordinary Gifts: Remarkable Women of the Delaware Valley, a unique collaboration of local artists and writers celebrating the ground-breaking accomplishments of Philadelphia-area women past and present. Extraordinary Gifts: Remarkable Women of the Delaware Valley, also featured in a book of the same title published by PS Books, combines original visual art with poems and short fiction inspired by 20 remarkable Delaware Valley women. Some of these women—Louisa May Alcott, Margaret Mead, and Marian Anderson among them—are well known. Others, such as Alice Steer Wilson, Dorothy P. Miller, and Helga Testorf, might be less familiar. But none of them allowed the limitations of society’s expectations for their gender to stop them from fulfilling their potential. The public opening of the exhibit will take place on Sunday, September 21, 2014 from 3–5 p.m. at the Cheltenham Center for the Arts.

“Women today, especially artists and writers, are often forced to make a choice between leading an extraordinary life and following a more stable, lucrative, expected path. Projects like Extraordinary Gifts remind us who the women were who came before us, allow contemporary female writers and artists to share their extraordinary gifts with the world, and encourage women to think about how they want to make a difference in their world,” said Melissa Tevere, art editor for Philadelphia Stories and founder of MamaCITA.

The 10th Anniversary Party will include an online and live auction that will benefit Philadelphia Stories’ mission to “cultivate a community of writers, artists, and readers.” Tickets for the celebration are $40 per person in advance and $45 at the door.   For more details, please visit http://www.PhiladelphiaStories.org.