FROM FATHER TO FOOT SOLDIER

Since the murder of his youngest son, Ron Davis has become a national advocate for justice.

Father’s Day celebrations are tough for Ron Davis. The June holiday reserved for Hallmark cards and the gifting of new ties has remained solemn since the Nov. 23, 2012 death of his 17-year-old son, Jordan.

Davis said he will spend Father’s Day clutching the final letter Jordan wrote. In it, Jordan declared his dad his “hero.”

The student at Samuel Wolfson High School in Jacksonville was killed when Michael Dunn, a 45-year-old White male, sprayed a round of bullets into the parked SUV at a Jacksonville gas station where Davis and three friends were listening to rap music.

Dunn approached the teens about the music’s volume and a 3½-minute encounter ensued and ended with Davis being shot to death. The controversy and two criminal trials that followed inflamed public outrage and loosened an already fragile grip on race relations and criminal justice mistrust in America.

But for the elder Davis, the outrage and loss was personal.

Loved music
The same son who rode “shotgun” with his dad on countless occasions and snapped fingers to old-school artists like Smokey Robinson, the Four Tops and the Delphonics, died tragically while listening to a rap lyric.

“Jordan loved music and was so well-rounded in almost every genre,” Davis told the Florida Courier.

“Music was his life and he loved the bass on the Brothers Johnson’s ‘Strawberry Letter 23.’ Some songs now just get to me, like Mariah Carey’s ‘Hero.’ If you want to see Ron Davis drop crocodile tears, play that song.”

Keeping busy
These days, Davis starts each day managing tasks to mute his pain. Some are monotonous. But all are necessary, like responding to emails, text messages and managing the R.I.P. Jordan Davis Facebook account, which has over 210,000 followers.

“It takes about 15 to 20 seconds each morning for me to realize I’m not going to hear Jordan’s voice downstairs. I miss not hearing him prepare to go school,” Davis lamented. “I used to peek at the clock to make sure he’s not late or knock on his door to give him a jolt.

“You don’t realize just those little things you miss when you wake up. It pains me with a strange sensation, but I put my feet on the floor and realize I just have to keep busy.”

On national stage
His newfound life is fast-paced. It has included President Obama extending a White House invitation for the launch of the My Brother’s Keeper initiative, and joining parents of other victims at John Jay College of Criminal Justice for panel discussions on justifiable homicide. He also traveled to Geneva, Switzerland to appear before the Committee for the Elimination of Racial Discrimination at a United Nations conference.

Memories of Jordan always travel with him.

“What a smile, what a smile!” marveled Davis of his spirited boy with the big grin. “He had the whitest teeth and this guy could light up a room. He used to do this little shuffle dance where he looked like a chef cooking with a frying pan. He was so funny. I loved when he did that dance.”

The father and son also were great friends. Beyond beach outings, they dueled while playing video games – his son’s favorite pastime.

“He played Xbox with his friends, but PlayStation with me. His favorite game was ‘Risk’,” Davis recalled. “It is an E-rated, world domination game with a military theme. He had his soldiers, I had mine and we went at it ‘til the morning hours trying to conquer the world.  It’s a wonderful, nonviolent game for kids to learn how to maneuver troops.”

Career choice
The game’s irony speaks to Jordan’s career interest. Despite a love for music, he sought to follow in a first cousin’s footsteps and become a Marine.

“I didn’t have a problem with Jordan choosing a military career. Both my parents were World War II veterans,” said Davis. “My mother was a nurse who endured being called ‘nigger’ in order to save soldiers who didn’t want to be touched. My father delivered fuel to tanks on the front lines. Imagine having to knock someone out with a syringe and then when they woke up telling them a White nurse saved their life after they called you a nigger!”

A Queens, New York native, Davis opted out of government service, turning down an offer to work for the FBI. He pursued a career with Delta Airlines and worked his way through the ranks before finally being transferred to Jacksonville as an irregular operations manager where he retired after 32 years of service.

“I lived right off of the Van Wyck Expressway (in New York) and as a kid, I could hear the planes landing and see people in the windows and always wondered where they were coming from,” Davis related. “I used say they probably came from Spain or Germany. I wanted to go around the world and go to different countries too. I’ve never wanted to be stuck behind a desk.”

Firm but fun dad
A hands-on father with a range of parenting skills, Davis also devoted his life to raising another son, Ron Davis, Jr. The 40-year-old recently relocated to Jacksonville from Fredericksburg, Md., along with his two sons – 14 and 9 – who affectionately refer to their grandfather as “Poppy.”

But to the late Jordan, Davis was simply the dad who prepared his favorite foods: pancakes flipped hot in an old-fashioned, cast iron skillet and a special-recipe seafood gumbo.

He is a father who is firm, yet fun. His memory of his son’s most ordinary infractions was nothing worse than missing a 10:30 p.m. curfew.

“The funny thing about both my kids is I didn’t have to whup them and I am so proud, probably in any interview, being able to say that,” shared Davis. “I am tall, have a loud, strong voice, and could just get in the face of my children and it would break ’em down so much they would just cry. I didn’t even have to touch them.”

Davis preferred innovative discipline. He once took a screwdriver and removed Jordan’s bedroom door after the teen attempted to exert his manhood by sneaking a girl in the house.

“He thought I was crazy,” Davis said with a laugh. “Jordan felt because it was his room, he could do what he wanted. But I told him, ‘Until you start paying rent or mortgage, nothing in here is yours.’ His friends all laughed and taunted him because he didn’t have a room door.”

Two trials
Davis has no problem portraying his slain son as “mouthy” and told Jordan his mouth would one day get him in trouble. He never expected death.

Davis and Jordan’s mother, Lucia “Lucy” McBath, endured two criminal trials awaiting justice in their son’s death. A jury deadlocked over a first-degree murder conviction of Michael Dunn. The judge declared a mistrial. In a second trial, Dunn was sentenced to life plus 90 years.

“I want a one-time, face-to-face with Michael Dunn. I want him to see the pain on my face and in my eyes,” Davis said. “Jordan wasn’t even worth calling 911. When he heard Jordan died, he just traveled back home for 2 ½ hours with no remorse. It was like, ‘I’ll call the authorities at some point when I get a chance, because all I did was kill a Black kid,” he added.

“Death is too quick. You don’t learn anything,” Davis explained. “But if you’re in prison for the complete rest of your life, behind steel bars and walls, what name is going to be on his mind every single day when he asks himself, ‘Why am I here?’ He’s going to think about Jordan.”

Legacy in film
Jordan’s life and death is now cinematic history in the film, “3½ Minutes – Ten Bullets,” which received a special juried award for Social Impact at this year’s Sundance Film Festival.

The documentary highlights footage of the teen’s brief life, both of the criminal trials, and includes intimate interviews. The HBO Cable Network has contractually agreed to be the sole U.S. distributor for screenings beginning in November.

Davis has agreed to give a portion of his proceeds to The Jordan Davis Foundation, which provides education and travel opportunities for youth across the nation who may otherwise never get an opportunity to leave their neighborhood.

“I miss my son every day and believe Jordan was meant to be on this earth for just 17 years. That was his assignment,” stated Davis. “When I look at this film winning a Sundance Award or my speaking before the United Nations in Geneva, I just say, ‘That’s all Jordan.’ This is all about him. He still lives like an angel in my life.” 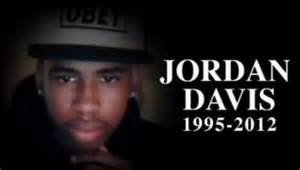 Penny Dickerson is a 2015 H.F. Guggenheim Fellow in Reporting. She is writing a series of stories that includes information gathered during a Harry Frank Guggenheim Symposium on Crime in America held in February at the John Jay College of criminal justice in New York.  This year’s theme is “Race, Justice, and Community: Can We All Get Along?” Follow Penny on Twitter @pennydickersonwrites.