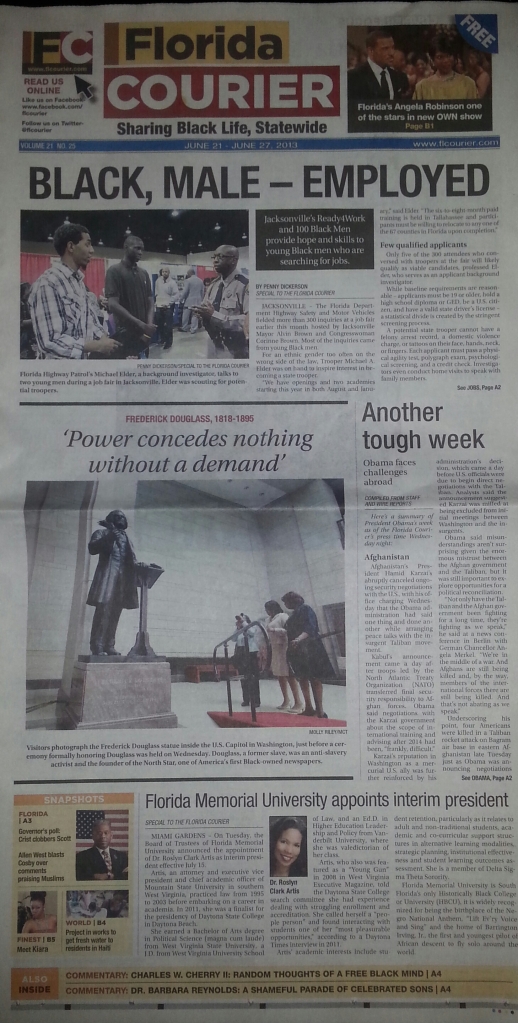 Jacksonville’s Ready4Work and 100 Black Men provide hope and skills to young Black men who are searching for jobs.

JACKSONVILLE – The Florida Department Highway Safety and Motor VeChicles fielded more than 300 inquiries at a job fair earlier this month hosted by Jacksonville Mayor Alvin Brown and Congresswoman Corinne Brown. Most of the inquiries came from young Black men.

For an ethnic gender too often on the wrong side of the law, Trooper Michael A. Elder was on hand to inspire interest in becoming a state trooper.

“We have openings and two academies starting this year in both August and January,” said Elder. “The six-to-eight-month paid training is held in Tallahassee and participants must be willing to relocate to any one of the 67 counties in Florida upon completion.”

Few qualified applicants
Only five of the 300 attendees who conversed with troopers at the fair will likely qualify as viable candidates, professed Elder, who serves as an applicant background investigator.

While baseline requirements are reasonable – applicants must be 19 or older, hold a high school diploma or GED, be a U.S. citizen, and have a valid state driver’s license – a statistical divide is created by the stringent screening process.

A potential state trooper cannot have a felony arrest record, a domestic violence charge, or tattoos on their face, hands, neck, or fingers. Each applicant must pass a physical agility test, polygraph exam, psychological screening, and a credit check. Investigators even conduct home visits to speak with family members.

For the many Black males who sincerely want to enter law enforcement, the path to becoming a trooper may prove to be impossible.

Jacksonville native Kevin Gay is a member of a presidential advisory council and currently serves on the Florida Department of Corrections’ Prisoner Re-entry Advisory Board. As president and CEO of Operation New Hope, an award-winning, Jacksonville-based community development corporation, he was given an opportunity in 2003 by then-President George W. Bush to pilot the Ready4Work program aimed at assisting ex-offenders.

Nevertheless, in a single decade, Gay’s initiative has turned dismal outlooks into opportunity and hope.

Poverty, not race
“Our whole issue has been around developing employers in Jacksonville who are willing to hire somebody with a felony,” said Gay. “The criminal justice system really impacted opportunities for many in the urban core to break out of poverty because there were very few employment opportunities, but the real issue of the criminal justice system is not Black or White or morality, it’s poverty.”

“What we’ve done in America is put everyone in one bucket,” explained Gay. “If you’ve ever been arrested, we sort you in one bucket and write you off and don’t know what to do with you.”

A successful solution has been found in the logistics field, which can be defined as managing of the way resources are obtained, stored and moved to the locations where they are required.

Gay believes logistics companies will be a major employer for the next five to 10 years in Jacksonville.

Through a collaborative effort with Grimes Logistics – one of Jacksonville’s largest business firms specializing in warehouse/packaging/distribution – the Ready4Work program placed between to 80 and100 people; 80 percent were Black males.

A 40-hour course is offered through a partnership with the University of North Florida, and the opportunity to actually obtain logistics certification, makes potential employees marketable and offers leverage to demand higher wages. Jacksonville-based Venus Swimwear is another large distribution company that successfully places Ready4Work participants.

“It’s all an issue of economics,” reiterated Gay. “Grimes now trusts our process enough to use us as their human resource company. They used to extend orders to interview 10 or 15 people. Now they say, ‘you send us 10, we’ll hire those 10.’”

Breaking the cycle
When Gay and potential employers discussed requirements for hiring individuals with felony records, the response was always the same: vet them to make sure they will be on time, exude positive attitudes, pass drug testing, dress appropriately and exhibit a willingness to learn.

“There’s a real science around this system. We have figured it out, and our recidivism, placement, and retention are all good,” explained Gay. “Close to 65 percent of our folks now pay child support, and that’s a testament to the work we do. This whole myth that young Black males don’t want to work or be reliable is simply not true.”

Charles Griggs, president of 100 Black Men of Jacksonville, Inc. leads an organization of professional men who have also identified the perils young Black males face on a daily basis.

“Some folks aren’t always able to circumvent the system when they get in trouble. They are just out of luck,” said Griggs. “We hear often that tattoos are a means of expression. This outlandish body art and dreads have Black males believing they will be accepted into a social rite of passage. As a result, they do what they see on television or mimic their buddies on the street.”

The nationwide organization implements mentoring programs to help promote extended examples for Black males to understand that it is normal behavior to wear a shirt and tie.

‘Real world’ Jacksonville Programmatic solutions
like “A Day in the Real World” are hosted biannually by the Jacksonville chapter, with the next event tentatively scheduled for August of 2013.

Professional men join forces with fraternities like Omega Psi Phi Fraternity, Inc. to offer Black males a “one-on-one” integration into society. The inclusion of members who are prosecutors and attorneys helps Griggs’ efforts to navigate prior or existing felony or criminal justice concerns.

“It is extremely important for them to understand that the system is not built for them to be successful. If you fall behind, you stay behind. But being employed makes you a member of an exclusive club,” stated Griggs.

Role-playing
“We present scenarios that give participants total accountability for all the activities they will have to encounter from getting up in the morning to going to bed,” he added.

For an intense day, more than 150 young Black men indulge in fictitious roles like boss and employee, landlord and tenant, or bill collector and debtor. The results teach coping skills for situations from what happens when the car breaks down to what happens to your family when you can’t pay bills in a crisis.

According to Griggs, “These scenarios are real, but where you are in life doesn’t have to be where you remain.”

Young men want more
Darrius Singletary, age 24, and Mishaa Cason, 25, are two enterprising Black males who are relatives. They manage their own car detail business, but long to be a larger part of the community workforce. They want to be in that “exclusive club” of consistent wage earners.
They attended the job fair along with their mother and were pleased to report that Comcast, JaxPort, and Kelly Services each offered employment prospects.

“The state of the economy dictates that we identify all resources to empower people,” stated City Councilwoman Kimberly Daniels, who was also at the job fair.

“My presence [and city leaders] at job fairs is important because it shows we are not wasting time, but are serious about helping people put food on their table.”