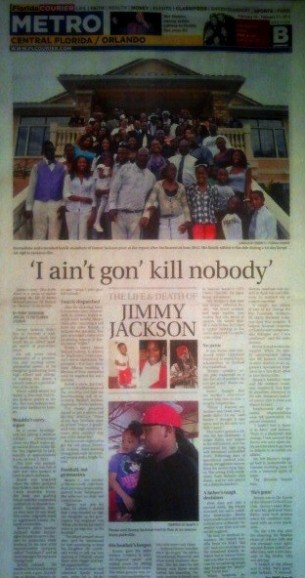 Immediate and extended family members of Jimmy Jackson pose at the repast after his funeral in June 2012. His family rallied to his side during a 10-day hospital vigil in Jacksonville. (CHARLES W. CHERRY II / FLORIDA COURIER)

Editor’s note:  This is the third in a series of stories framing the life of James Roland Jackson, III, known as “Jimmy” to his family.

BY PENNY DICKERSON SPECIAL TO THE FLORIDA COURIER

He will never relive memories of a prosperous and exciting entrepreneurial career, of his daughter graduating from high school and college, of walking her down a church aisle as a proud father of the bride.

When asked where her daddy is, five-year-old Denia Jackson points to the sky. She now believes bullets send daddies to heaven.

In a crime investigators are calling a random robbery, eyewitnesses claim two Black males approached Jimmy at the Silver Fox nightclub in Jacksonville at approximately 4 a.m. on June 2, 2012.

The club was packed. The parking lot was full of cars that were parked in rows in pitch darkness.

Jimmy was unarmed when the killers pumped four bullets into his 6-foot, 1-inch muscular frame. His body was gushing blood until first responders rushed him to Shands Hospital’s TraumaOne. Eleven days later, he was dead. The crime, originally listed as aggravated battery, became a homicide.

Jimmy’s older brother Anthony Rozier encouraged Jimmy to carry a firearm for protection while working for his own artist representation company called “Exclusive J” and as road manager for rap artist Young Cash.

Jimmy refused.  He made a conscious decision not to own a gun. According to Rozier, Jimmy’s response was, “I don’t need no gun ‘cause I ain’t gon’ kill nobody.”

After the shooting, family members were immediately in contact. Rozier arrived from nearby Mount Dora after receiving a call from his sister Brandi, a Jacksonville resident. The pair informed others with promising reports of Jimmy being “stable.”

Jimmy’s uncle, Jay Carr, got his call within hours of the shooting and had the heartbreaking task of informing Jimmy’s mother, Stephanye Rozier-Jackson.

“I’d always prepared myself to get a phone call like this,“ said Carr.  “Three of my four brothers were in prison before I graduated from high school because they couldn’t stay out of the street life.”

But he never expected to get the call about Jimmy, an honest, hard-working young man with no criminal record and a bright future.

Shante C., the mother of Jimmy’s only child from their previous relationship arrived from Tallahassee. She reflected on their last conversation.

“Jimmy was one for jokes. So when I shared that I was headed to sign our daughter up for gymnastics, his response was ‘What, you mean you don’t want to go sign her up for football?’

“We joked around about that, and he mentioned he had something to send his daughter. He continued trying to talk me into moving to Orlando where there were bigger and better opportunities.”

Jimmy’s immediate and extended family would now unite for a 10-day bedside vigil.

Jimmy gave his older brother Anthony a ‘middle-fingered salute’ and smiled when his sibling entered his hospital room. The lewd gesture was comedic communication between the two half-brothers, who were very close.

Anthony Rozier was Jimmy’s “go-to guy” for advice on personal, financial, and even some business decision. The last time he saw Jimmy was three weeks before the shooting. Despite owning a brand new Camaro, Jimmy wanted to borrow Rozier’s 1971 Chevy Chevelle. He liked being ‘old-school.’

“My brother’s first love was music,” reflected Rozier. “He loved animals and kept reptiles and snakes, but was afraid of spiders. He would slide off a roof before he’d face a spider! Nothing in the world mattered if a spider came along.”

It was Rozier who convinced Iowa’s Graceland University to award Jimmy scholarships in football and basketball.

“Jimmy couldn’t really play basketball as a kid, but out of nowhere he just got good,” Rozier explained.

Rozier thought that his brother’s athleticism would help him endure a lengthy hospital stay.

“When I learned my brother had been shot, it really didn’t hit me,” said Rozier. I thought it was once, and in the arm, so I didn’t panic.”

One bullet grazed a rib, one hit his abdomen, a single bullet was lodged in his left buttock, and one punctured his right lung and remained embedded there.

Following days of specialized medical care, Jimmy struggled to recover from his severe lung injury. His strong body weakened, both kidneys shut down, and he was placed on a dialysis machine.

Over days and into a second week, Big Jimmy watched his son’s condition deteriorate. Jimmy was transferred to the most critical area of Shands’ Intensive Care Unit and was on life support.

He had no medical insurance. His health benefits from his AT&T “day job” had not yet kicked in. He remained heavily sedated, but at various intervals was able to communicate by recognizing simple sign language for “peace” and “I love you.”

When surgeons informed Big Jimmy that the dialysis machine was unable to flush his son’s kidneys, he reached out to trusted expertise.

“I sought the advice of one of my Omega Psi Phi Fraternity brothers, Dr. Harry Marshall, a former Iraq War surgeon. It helped, because surgeons at Shands were using complex dialogue and I was conflicted,” said the elder Jackson.

Jimmy was placed on life support. When the family contemplated taking him off, Jackson decided to allow doctors to try aggressive specialized treatment as a last-ditch effort to save Jimmy’s life.

Jimmy’s baseline vitals and his medical condition improved, but family members remained by his side. Rotations included round trips to local and distant homes.

“I hadn’t had a shower in days,” said Jackson. “Prior to a (hospital) shift change, I was assured that Jimmy was once again stable and decided to go back to Atlanta to reconcile my affairs.”

He left Jimmy’s hospital bed in Jacksonville on Tuesday morning, June 13 with a renewed spirit of hope.

The decision haunts him.

Jimmy was in the hands of the Shands Critical Care Unit.  Jimmy’s sister Brandi and his girlfriend Kiara Bailey were both present when his condition worsened with an eerie quickness.

On the 11th day after the shooting, the familiar chain of cellular calls and text message once again ensued. Rozier called Carr, who then sent a text message to Big Jimmy, who was driving.

“I looked at my phone and it read, ‘He’s gone,’” said Jackson. “I immediately turned around and drove back.”

“We all thought Jimmy was gonna pull through,” offered Rozier.

No stranger to death

According to her mother, Jimmy’s daughter Denia had already been exposed to several deaths at the young age of four.

“My grandfather passed away the same night Jimmy was shot,” Shante C. explained. “My daughter is a very smart and bright child. Anybody who knows her can tell you she has the soul of someone who has been here before and I didn’t really feel I needed to wait and tell her.

“So I told her the evening I found out. She sat there blank for a few minutes as if she was processing what I told her, and then she broke down in tears and repeated over and over again, “I want my daddy!”

Rozier remained his brother’s keeper until the end.

“The last thing I said to Jimmy was, “They gon’ have to cut your dreadlocks off for surgery.” He looked at me funny and I said, ‘Just kidding.’”

Rozier now had a responsibility he never imagined or wanted – getting things together in preparation for his baby brother’s funeral.

For an already emotionally stressed family, the subsequent funeral exasperated them from planning to payment.

Postell’s Mortuary in Apopka was selected. A glitch elevated their grief when the family was informed two days before the Saturday morning service that Jimmy’s life insurance from his AT&T job could not be used for payment. Rozier had less than 48 hours to come up with $10,000 to pay for his brother’s funeral.

“I called any and everybody,” said Rozier. “My grandmother, Mae Smith, gave $2,500 and I got $500 each from several different family members. Rap artist T-Pain also helped. I scrambled and came up with the money in one day.”

Carr, a property supervisor who works for the city of Orlando, was willing to borrow from his pension to bury the nephew he remembers as a gentle and soft giant.

“Everyone was willing to help, but we were restricted by time,” said Carr. The family has applied for bereavement reimbursement from the state attorney’s office in Jacksonville and social service agencies. More than six months later, they haven’t received anything as of this writing.

Jimmy Jackson’s body arrived at Postell’s Mortuary without his arms. He was a bone donor. Both limbs had been sawed off to preserve his bone marrow, which can save the lives of people with diseases like leukemia and breast and ovarian cancer.

Jimmy’s decision to not carry a gun was as principled as his choice to leave behind two strong limbs to save a stranger’s life. A warm humanitarian until his untimely end, it was perhaps his most valiant contribution to society.

The crime against Jimmy Jackson – and his family – remains an unsolved cold case.

Part 4: The Silver Fox nightclub and its violent history.