"An Online Voyage of Voice."
7 Comments

Posted by Penny Dickerson on March 2, 2016 in Bold and Bodacious Blogs, Creative Writing

Happy Birthday to my eldest sister, Linda Veronica Herron who is not only one of this countries BEST military leaders, she is an exemplary daughter, a faithful sister, a compassionate mother of three, strong African American adult men, a dedicated grandmother to two precocious boys, a loving companion, an aggressive entrepreneur, and an all around beautiful human being that God blessed mankind to embrace.

I’ve been promising myself (and Linda) that I would take the time, toil, and neck strength necessary to help her market her private business venture which you will read about later in this posting. What better time to bless “Her Hoorah Majesty” than on the date of her birth: August 2, 195_.  Fill in the blank on your own!

As her youngest sister (there are three of us former Robinson girls), I have the unique ability to offer a perspective of Linda from an angle that no one else can, simply because I probably am responsible for making her the tough soldier she is today.

We were raised “military brats” as  William C. Robinson and our mother Ethel carried us in tow across the U.S. and the globe in a journey called: growing up.

Linda, allow me to take this opportunity to offer you heartfelt apologies for all of the following:

Honey you had to grow-up and be Army Strong. Aren’t you thankful you had a bratty, little-sister like me?

Thank you for taking me skating and to Pep Rallys and to Football Jamborees and Football games and the Fair and to the Center and Florida Theatre in Downtown Jacksonville back in the day to see Bruce Lee movies.

Thank you for taking me to my first Parliament Funkadelic concert followed by Earth, Wind, & Fire, and for teaching me the difference between The Gap Band and War and wow…remember when we were in Ft. Ritchie, Maryland and went to Capital Centre to see the Jackson 5?

Remember all those mornings we woke up and YOU were in charge of breakfast, all the nights YOU were in charge of latenight snacks, but always took the big pickle for yourself (Heifa!). I played the Clarinet because YOU played the Clarinet, and I was proud of being a Leo because YOU were a Leo and when I grew up, I was gonna have Lil’ yellow “Vega” just like yourn …but then you wrecked it, so I ended up with a Nissan Sentra instead. Oh by the way, sorry I hit your car two months ago in Mom’s driveway and kept going. Boy, that really pissed you off (testy, testy).

I HAD to go everywhere with you because I was your little sister and it was LAW, but you have given me so much inspiration and leadership and love and free Shea Butter and money over the years that even words could not express how much I love you and how grateful I am for all that you’ve done and shown me as a young woman, a collegiate scholar, now a mother, and NOW a grandmother. You exemplify wisdom, pride, strength, courage, heritage, and pride in all that you endeavor and despite my growing up calling you “blue-black” I have always been envious of your ancestry-blessed, beautiful black skin.

You wear black well and you wear woman even better. 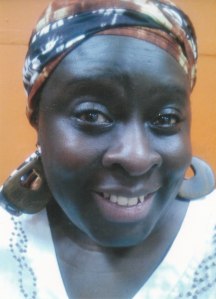 A decade called “50+” is fortunate to court your presence. All praises, All praises to a Nubian Queen called YOU!

You are STILL the “Go-To” woman of the family and extended family. You believe and BREATHE family and we have a “legion-lotta” extended country cousins. But, who knows them all by name? YOU.

Of course it was never just you and I, there were and will always be, THREE of us:

Code for Linda, Natalie, and Penny…but I, of course, got “first name shafted” and left with being named Merdis…for life. (I’ll take two of those whoopin’ apologies back for that.) 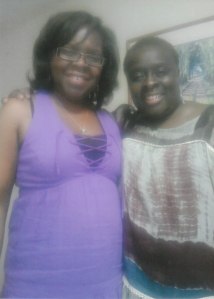 You and Natalie (Columbia, Maryland) are two wonderful sisters and now, friends. Natalie followed leadership suit and served…oh how many years in the United States Air Force as a Recruiter and now holds it down with family and FOR family, just like you. I love you both a great deal and need to say it more and more and more each day. I love ya’ll (and I apologize for all the whoopin’s you both took on my behalf…Natalie probably got it more than you on my behalf.)

I had to give Natalie her “full-sized photo” props below because she is doing what she enjoys most: Eating some doggone CRABS!  Moved to Maryland in the late 80’s and we ain’t seen her since. Maryland Crabs, Florida Crabs, Crab Cakes, Crabs in Gumbo…CRABS! (Love you Natty!)

Linda the good times with you will always out weigh the not-so-good…you taught me not to think “BAD”…just “not-so-good.”  You are my road dawg, Zora Neal Festival crony, Literary Fest and Funk Fest partner, Salmon Croquette and Homemade Biscuit BEST customer requester and less we forget alllll the times you have been there and been there and been there for me via bedside vigil and home-stay during my multiple hospitalizations. I can always depend on you and everyone else can too!
Which brings me to the three, grown men you have birthed and raised from all points of the globe. Mercy…what years were you pregnant? Look at your three, just like Lin, Nat, & Penny: Micah…Jadon…and Quincy.  You have sacrificed immensely…IMMENSELY and just keep making it happen no matter what, to make sure you are there or they are here or someone is somewhere to take care of your trio of fine black men, not to mention consistently teaching them to take care of themselves FIRST.

Now that oldest one is a character though…Hey Micah…remember when you and I got lost in Puerto Rico…I mean LOST?

Linda, I remember when you gave mom temporary custody so you could go in the Army Reserves because you saw a path…a way…a journey. You still have excellent vision. Stay the course. Your boys will follow the leader you are and you ARE…a leader.

In your most heroic and famous move of womanhood and grandmotherly strength, you rescued both Micah, Sr. and his first born Micah, Jr.  I saw you STRUGGLE to get your grandson out of New Jersey’s Foster Care system until a judge awarded you “Kinship Custody” (what is THAT?) and ultimately, you won full Custody of Micah Elijah Delacruz-Rhymer, Jr. pictured below. You are doing it, doing it, doing it til God is satisfied with your wonderful works. Remarkable! We love us some Micah, Jr. and are so glad for the miles you trekked and the “trick moves” you pulled to have him become a permanent part of this family. You BREATHE family (Poof…Family: Amen).

And then there were two, but did you say: “I’m through?”  No you did not, you took both grandsons and juggled and jiggied and just did it. You do that stuff like Nike girl…you “JUST DO IT!”

~AND FOR HER FINAL ACT ~

Yes, Ladies and Gentlemen, not only does she protect the country, pledge allegiance to the American Flag, birth boys, raise grands, support her mother, break some off some for her lil’ sister, but she is also WHAT? An Entrepreneur.

You have been up to your shoulders in body butters and shea butter cut straight from the nut and oils and potions and fabrics and bags for a MINUTE. Oh to pursue a dream and then watch it flourish. It’s not easy balancing life and a business and I know it’s a hustle, but I thank you for your stick-to-it-ness and your zeal to appeal to a mass audience of people who are a market crying for your products. 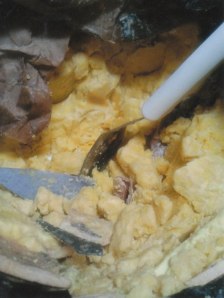 For those who don’t know, Linda buys a HUGE Shea Nut…straight from the Motherland’s tree and then carves it into containers or mixes it with pure oils that keep me smelling oh so sweet and feeling too, too, soft.

Her products are PURE, not the chemical derivatives that Vaseline, Dove, and other commercial entities are pimping as “Now with SHEA BUTTER.”  Don’t believe the hype. Purchase what is “pure” and support Independent business owners who don’t misrepresent the essence of the earth by adding preservatives and then trumping prices in drug stores and Asian Hair Stores that also pimp human hair (just saying…). I know ya gotta get weave hair somewhere, just don’t buy the soap and lotions.

Linda is also a talented seamstress (that runs in the family…Aunt
Gloria is a MASTER seamstress and my mother is an Upholsterer to be reckoned with…when her neck don’t hurt.) You will be a blessed Sistah to ever receive or purchase one of her heritage panels, quilts, bags, or pillows. I have a BEAUTIFUL quilt and also a very lovely panel that hangs over my shower curtain from the print pattern below. So versatile is she, a pattern can become a panel, bag, pillow, or a quilt. Bing…just like that. Note: I’ll be needing some more of that special “Michele Obama” blend of oil and shea. Got that? It’s not a complicated ORDAH. Bring me some this weekend please:-) 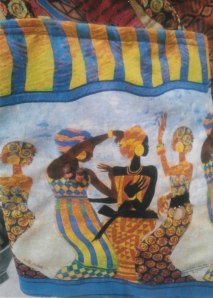 Winding it down…winding it down. When she’s not doing all of the aforementioned, she has a very special someone in her life who she sees every weekend when she comes to Florida: Harry

He helps her hold it down in a relationship way that is theirs and that’s that. You don’t ask Sgt. Herron about her “Bis Nis” lessen it’s “Sistah Soldier Shea Shop” business, so we welcome Harry as family because like I said (twice)…Linda is my sister and she BREATHES family. Happy Birthday Linda and thank you for being such a beautiful blessing in my life and the life of so many others. I love you. P