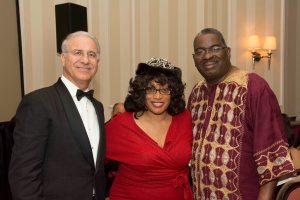 The ambassador to Morocco, a Florida  congresswoman, two mayors, an Emmy-award winning actress, and a Tony-nominated  Broadway star were among the prestigious in attendance for the silver  anniversary celebration of the Zora Neale Hurston Festival of the Arts and  Humanities held in Eatonville, Florida—“the oldest incorporated African-American  municipality in the United States.”

A novelist, folklorist and anthropologist, Hurston is the town’s  distinguished native daughter. And in her honor, a nine-day, multi-disciplinary  gathering has attracted global Zoraphiles whose prodigious adoration has  overwhelmingly sustained the event. “Celebrating Our Milestone: 25 years of  Zora! Festivals” convened the last week of January, and included a plethora of  intellectual panels bookended by poetics, comedy, drama, an outdoor street  festival and an African elegance and black tie honorarium gala.

Congresswoman Corrine Brown served as honorary chair, but is a longstanding  festival supporter who secures sponsorship, and in 2010 ensured that Haiti was  an integral theme following its devastating earthquake. Brown’s political  influence is credited for the presence of Ambassador Rachad Bouhlal, of the  Embassy of the Kingdom of Morocco, who shared, “A photo of Zora Neale Hurston is  in the Morocco airport, which is a testament that she is loved all over the  world.”

A notable Harlem Renaissance presence, Hurston embodied deserved hubris and  an indomitable spirit that served as a blueprint for survival during an era that  suppressed Black women’s dreams. In 2003, the United States Postal Service  granted her likeness the ultimate stamp of approval, and lapel pin replicas were  Congresswoman Brown’s gift to thousands of attendees.

The exclamatory Madame Zora would have loved the revelry, beginning with a  Black History Month kickoff hosted by sponsor Onyx magazine in the  rotunda of Orlando’s city hall. Opera singer extraordinaire Curtis Rayam, Jr.  lifted his booming voice and sang during a program that recognized contributions  extended by municipal officials and representatives from the Association to  Preserve the Eatonville Community, Inc., under the leadership of President  Marie-José Francois, M.D. and Mayor Bruce Mount.

Orlando mayor Buddy Dyer presented keys to the city, and while the evening’s  programmatic agenda was necessary, dual midnight parties awaited. Wednesday and  Thursday’s Round ’Bout Midnight Spoken Word and Stand-Up Comedy set the tone for  an arts awakening in Eatonville reminiscent of Hurston—an effervescent wit and  storyteller said to have tickled the hiccups out of all whom embraced her.

MUCH ADO ABOUT ZORA!

Michael Dinwiddy and Elizabeth Van Dyke, each seated parallel upon a stool,  conceptualized and directed the program of readings set under soft lights.  Whitfield and Brooks captivated the audience with whimsy and reverence through  Hurston’s literary catalogue, including Dust Tracks on a Road, Mules and  Men, Their Eyes Were Watching God, and Moses, Man of the Mountain.   A series of notes titled A Life of Letters offered intimate  insight into the pride and pain Hurston experienced through her storied life.  Despite her untimely 1969 death, for a single evening among surviving relatives  and friends, Zora lived.

Rows of white tents saluted each side of the street, where vendors sold  select must-haves and youth from Macedonia Missionary Baptist Church performed  Negro Spiritual and Hymns: Down Through the Years. An international  food court pleased the palettes of an amassed crowd sprawled on the festival  lawn in anticipation of a sold-out concert.

Famed R&B crooner Frankie Beverly proved he’s still got  that fit body and the sultry vocal goods to lead Maze through a series of funk  favorites including “Joy and Pain,” “Back in Stride,” “Happy Feelin’s” and the  unifying hit, “We Are One.”

Dinner and an awards ceremony closed Saturday evening with red carpet  sophistication. Voice and violin was offered by former Island Records recording  star Miles Jaye, while Melba Moore hit high notes and held them long with an  impromptu a capella tease. Referencing early career discrimination and her  discovery of the Schomburg Center for Black Culture, poet, activist and scholar  Sonia Sanchez accepted the Richard A. Long Award for long-term dedication to the  Zora! Festival.

What began in 1989 with a table and a dream ended on a poignant note by  Elizabeth Van Dyke, who closed the evening with class:

“I love Zora. I love my people. I love African-American people, and I love  N.Y. Nathiri [director of multidisciplinary programs]. We have to just keep on  doing what we’re doing… keep pushing and pushing that rock up a hill.”

Penny Dickerson is a Florida-based independent journalist. Her  work can be viewed at pennydickersonwrites.com.