"An Online Voyage of Voice."
4 Comments

The voice behind every Black picnic, BBQ and wedding of the past four decades discusses the longevity of Maze 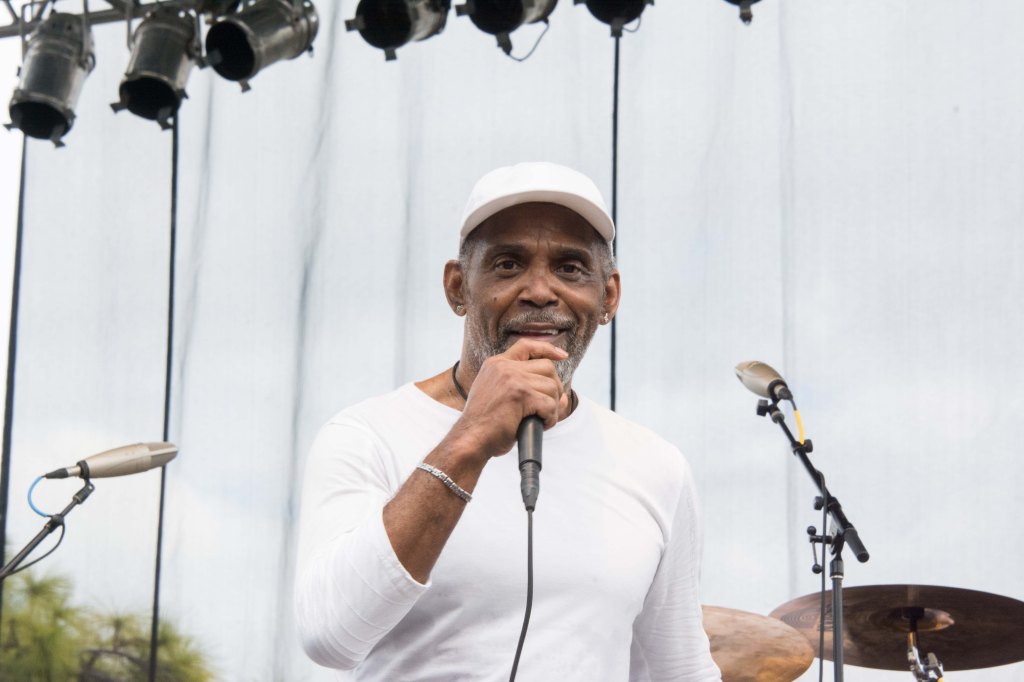 The one, the only Mr. Frankie Beverly

Every funk band has a front man. It’s an old-school law obeyed by Maurice White, whose vocals reigned supreme as Earth, Wind and Fire’s fourth element, and Sugarfoot, who kept the Ohio Players roller-coastin’. Frankie Beverly is every bit as iconic—a raw soul master.

He’s the sing-and-sweat powerhouse who personified all-white sexy before Diddy anointed the Hamptons. He’s the stylin’ lady magnet who catapulted the baseball cap as much as the hip-hop movement. And he’s amazing—world-renowned and still selling out world venues with the Maze sextet right behind him.

RELATED: [VINTAGE VISION] MARVIN GAYE GETS IT ON

An inside glimpse reveals a man whose conversation feels familiar without flirtation, save for an occasional “honey” or “sweetie” to segue thoughts. But Frankie Beverly is California cool, a tempered spirit; just an ordinary guy from Philadelphia who turned a “doo-wop” dream into a mind-blowing career.

Born Howard Beverly, the future Frankie Beverly harbored so much love for heartthrob Frankie Lymon that he jacked his name. “I was Frankie Lymon crazy when he came on the scene,” he admits. “People would call me ‘Little Frankie.’ I used to sing Frankie Lymon songs on street corners and people use to throw me money.”

The labyrinth to stardom is a story told over and over, and shared by many in Beverly’s era. In Frankie’s case, church singing transitioned to a teen group called The Butlers, which musically morphed into Frankie Beverly’s Raw Soul. The big break came when the one and only Marvin Gaye made the band his opening act with a single stipulation:  change the name. That nudge originated the moniker that stuck: Maze.

Now Beverly is 67, and the Maze’s “raw soul” identity is more frequently marketed as urban contemporary soul. Their loyal fan base is trained to expect timeless music, as Frankie leads “Joy and Pain” and “The Morning After” jam sessions. Both tunes are legendary for making grown women (and some men) straight scream.

Gratitude, God, but no Grammy

Gratitude and humility seem to precede any and all Frankie Beverly motives, and no one is more surprised by his career than the man who made “Happy Feelings” an anthem long before Bobby McFerrin or Pharrell Williams whistled hits.

“I am most amazed by the success of our longevity,” says Beverly. “I never, ever, ever thought it would be like this. I’m laid back, and I know music is a gift given to me to initiate, and I take that serious. I thank God I have people around me I can trust, they’ve been with me for 30 to 40 years. It’s a real blessing.”

Despite an amassed catalogue of classics, the Maze featuring Frankie Beverly Grammy Award remains elusive, but it’s an industry snub Beverly takes in stride. “The love the people give us is most amazing,” he offers. “I don’t care about no Grammys. It’s about the reward, not the award. I walk around on my knees I’m so thankful.”

Does Frankie Beverly meditate? Yes. Does he work out to stay in shape? Negative. He claims no special fitness regime and cites the stage as his ultimate workout. Beverly also hasn’t eaten red meat in 35 years—occasionally chicken, and fish “for protein.”

A high-octane schedule defines Beverly’s existence, so what (if anything) does he listen to for slowing down his internal metronome?

“I don’t really play a lot of music, believe it or not. And when I do, I prefer jazz,” said Beverly, who reiterated a preference for the standards. “I like smooth jazz too, but Charlie Parker, Miles Davis, those guys really still do it for me. At this time in my life, jazz does it. I tell you who I really like is Chris Botti. His music is very nice. But I still like listening to Sam Cooke.”

The late Cooke remains Beverly’s lifelong inspiration. “We were at Philly’s Uptown Theatre trying to get his autograph. [I] said, ‘Mr. Cooke, Mr. Cooke, can you sign mine?’ He said, ‘Have you guys ever been backstage? Well, come on!’ ” The story is credited for Beverly’s own generosity. “I don’t turn people down. I always think of Sam Cooke and how kind and patient he was. He didn’t have to do that for us.”

Frankie Beverly has a simple message for today’s musicians: get back to basics.

“You have to still go back. It’s hard for today’s industry. Studios can’t get business; people are using machines. No matter how much money is at stake, people still want the ‘real deal.’ I want today’s music acts to return to the real deal. No mixing, no machines.”

Black women nationwide owe Beverly a bevy of thanks for time-honored respect. But for the music industry’s hardest working and wealthiest woman, he offers a profitable prediction: “I think Beyoncé is ready to take her next step, and I tell you what I mean by that. She can really sing, but I would like to see her show her skills. I mean, she’s a mom and a wife now. So I’d love to hear her record Christmas carols or perform live with an orchestra… just sing.”

A wisdom grin and goatee with gray sprouts are a welcome presence for Beverly, who resides in California’s Bay Area and is “grandpa swaggadocious” to three precocious grand fans he insists “use and abuse him.” Mention retirement and he balks.

“I hope not,” he says. “Something would have to be wrong [with me]. I just want to keep on doing this until I can’t do it anymore.” And he doesn’t plan to stop. But will the eternal performer’s career be complemented by new music?

“I’ve been thinking about it, but ya know, we are a working act,” he says. “It’s not like I can tour and come home. I can’t make great music that way. Back when it was the Kool Jazz and Budweiser Festivals, we could work three months and then take time off to go into the studio. But we aren’t going to piecemeal making music.”

Beverly vows the new music will still be love music—life music— and that he and Maze aren’t going to stray from what they’ve been doing.

“I’m tickled about a new piece on the album titled ‘The Jam of My Life’,” Beverly shared with a sinister snicker. “You meet someone, but you’re already with someone. I know about that all too well, and athletes and these young musicians—or the average person who just has a lot to do—they know these situations all well too.”

Maze featuring Frankie Beverly has unified the masses with a legion of hits, but the single closest to Beverly’s heart is 1983’s “We Are One.” No explanation is needed. Still, he offers this: “It’s true. If you are lucky enough to travel around the world, you’ll find we’re all the same and want the same thing: love! People for the most part are good. If not, we would have torn the world apart by now. I’ve learned to not be racist in my life. Our White brothers are our brothers too, and I’m not trying to be some kind of love guru or anything. We are the same.”

Penny Dickerson is a Florida-based journalist whose work can be viewed at pennydickersonwrites.com