[AFRICAN CONNECTION] Kongo Across the Waters

The global perception of Africa is  often lathered with stunning scenery from the Serengeti and the symbolic pride  of former South African president Nelson Mandela. Indeed, the second  largest continent in the world is an amazing conglomerate of regions—a resource  for wealth and a tourist magnet for its sprawling beauty. But beyond the  beatitudes are historic war atrocities, an AIDS epidemic, gross famine and  shameful middle passage origins. If respectable balance exists, it’s the uplift  and celebration of the rich culture Africans have contributed to  humanity. Among them are archived remains which confirm the relevance of a  powerful kingdom called Kongo.

Kongo Across the Waters is a groundbreaking art exhibit that opened  October 22 at the Samuel P. Harn Museum of Art (at the University of  Florida—Gainesville). The vast installation invites a national audience to tour  distinct, artistic aspects of Africa for free. With an emphasis on West Central  Africa, more than 160 maps, artifacts, sculptures and contemporary works  comprise an impressive collection spanning 500 years that is educational in  approach, yet culturally appreciative through creative layout and  design.

“At its height, the Kongo Kingdom occupied a pivotal  position—geographically, geopolitically and culturally—in the continent’s early  interaction with Western colonial powers, creating a legacy that can still be  felt today in the Diaspora communities of the American Southeast,” offered Susan  Cooksey, curator of African art at the Harn. “We’re especially pleased to  include in this exhibition several artifacts from the Kongo Diaspora that have  rarely been seen in a museum setting.” 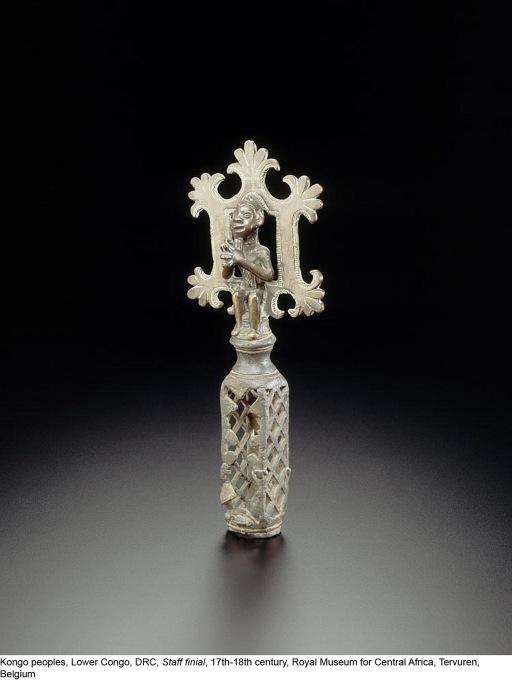 The Royal Museum for Central Africa (RMCA) in Tervuren, Belgium co-organized  the unique collaboration with the Harn museum, which was inspired by numerous  directors, curators and scholars who have invested decades of study in African  Art. Serendipity merged initial meetings between Guido Gryseels, the  director of RMCA, and David Sammons, dean of the University of Florida  International Center. Perhaps yards away on the same campus, Cooksey and  colleague Dr. Robin Poynor, professor of art history, were in the midst of  ongoing discussions to develop an exhibition dedicated solely to the Kongo. All  great minds eventually met and Harn Museum director Rebecca Nagy unequivocally  endorsed the genesis of Kongo Across the Waters. 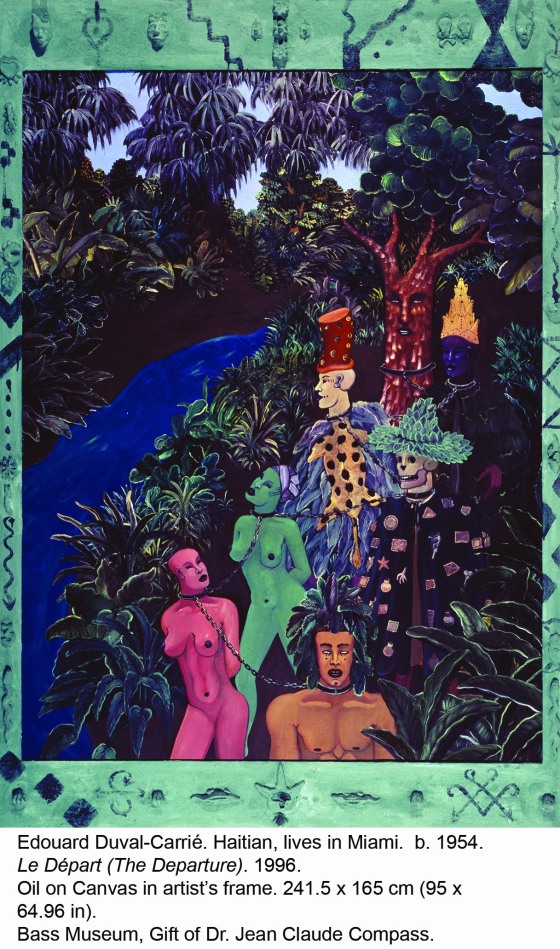 According to Dr. Poynor, who has authored numerous books on  African art, the Kongo kingdom was chosen for the exhibit for a number of  reasons. “They have exquisite art, they were one of the early kingdoms  known throughout Europe, and the Kongos were involved in the early slave trade,  so there were a great number of Kongos who not only sent slaves out but came as  slaves,” Poynor explained. “An underlying foundation for African-American  culture is Kongo culture.”

The task of compiling a “visitor-friendly” exhibition void of complexity  could have been daunting for the team; however, innovation, accurate timelines  and a commitment to dignify and uphold the ancestral heritage, philosophies and  preserved Kongo identity served as formidable guidelines for success. 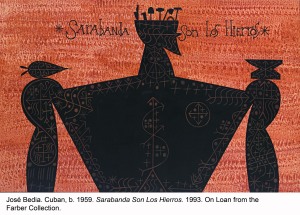 Thematically divided into five distinct sections, Kongo  Across the Waters begins with 1598 European maps of the “Congo” depicting  the Kongo Kingdom as a separately established territory from the town of Mbanza  Kongo, located south of the Congo River. The Kongo kingdom was in place prior to  European arrival in 1483, but when the kingdom actually began remains  debatable.

First and foremost the exhibit is about the Kongo people—their lives,  customs, and culture. Kongo nobility and elitism is evidentiary as they  exchanged prestigious gifts with Europeans, which illustrates the Kongolese were  intellectual and savvy traders who later evolved as artists that recognized  their masterpieces were valuable commerce. An array of antiquated wood, copper,  brass and metal crucifix symbols and Saint Anthony figures substantiates that  Christianity conversion and religious zeal served powerful roles in Kongo  culture.

Museum walls painted in earthen-tone hues separate each  exhibit section, further complemented by larger than life murals to create a  powerful visual aesthetic. While most of the authentic arts and artifacts are on  loan from Belgium’s RMCA, Kongo culture travels across the water that brought  African-Americans like cargo to the United States in 1619 during the slave trade  in a section II segue.

Recent excavations reveal startling archaeology discoveries exposing  cultural treasures, ranging from a jeweled rosary with two medals and a  conjurer’s cache of stone, pins and quart found in the Charles Carroll house  excavation in Annapolis, Maryland. The latter is believed to be the personal  hidings of an enslaved woman. Colonoware pottery from the Dean Hall plantation  in South Carolina and Ft. Mose in Florida are also on view.

Culture and custom merge in sections III and IV, as the  exhibit visually crosses the water and returns to the Kongo kingdom, where rites  and rituals are explored in the examples of iron and vegetal fiber double bell, ngongi, and wood carved whistles. A Voudou (voodoo) Medicine  Packet from the History Miami Museum resonates the role of early Haitian  spiritual beliefs. 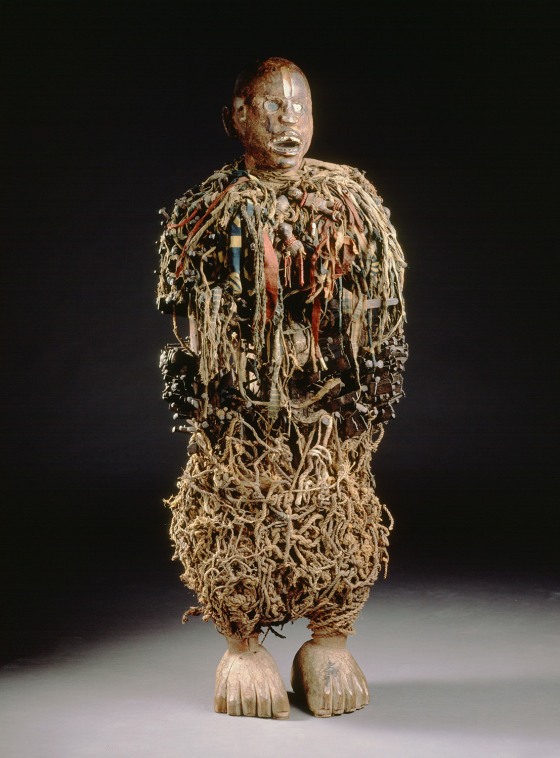 Hanging displays of massive raffia mats and stunning textiles used to lay  upon graves and numerous “anthropomorphic power figures” known as nkisi reinforce that Africans believed in the preservation of life through  healing, embraced high regard for the existence of spirits, and gave eternal  honor to the dead.

Remarkable is the selection of contemporary art submitted by  a culturally diverse quintet of artists, which brings the five-century Kongo  journey millennium-forward. Among the standouts is a mixed-media collage by  Radcliffe Bailey. The framed “medicine cabinet” traces his own identity and  roots, including his DNA sequence to slave ships, Marcus Garvey and more.

An interactive music platform includes sound sticks and earphones that allow  patrons to experience five separate tracks of traditional Kongo music, while a  commissioned video produced by a Louisiana trio (Royce Osborn, Freddie Evans  Williams and Luther Gray) combines the folkways and emerged customs from gospel  to hambone to juba and jazz.

From coiled baskets and bowls, pots topped by human figures,  face vessels from the Smithsonian National Museum of American History and an  extraordinaire 20th century memory jar, Kongo Across the Waters gives honor to a  delicately restored and preserved cultural heritage African-Americans perhaps  unknowingly retain to this day.

Kongo Across the Waters will remain in Gainesville, Florida until  March 23, 2014. 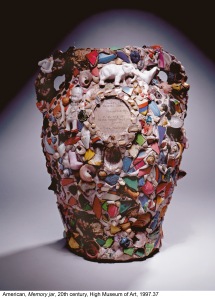